Mascara (May) was a barn favorite.  She had a pet quality personality.  In addition to being a lovely mare in terms of gaits and conformation, she proved that thoroughbreds can do dressage.  May competed successfully through Prix St George with her owner before retiring to the breeding shed at Wits End.  May died during colic surgery at Virginia Tech in 2012, and we still miss her everyday.

From her owner and rider: I started showing “May” when she was a three year old for her owner in Missouri. We focused on Hunter Under Saddle and took high points in Hunter and Two/Three year old Snaffle Bit on the MSSCA show circut her three year old year. She then took a year off and had an appendix QH foal in 2000. I purchased her as a five year old and started Dressage training. May had always been easy to ride and to train and she took to Dressage like she had been doing it all of her life. Her family line has many champion hunters, and she would have been super over fences but we focused on Dressage. We moved through the levels fairly quickly, and I earned my USDF Bronze Metal in 2002. She earned exceptional scores at third level especially (67%) and really enjoyed the challenges of third and fourth level. We moved up to Prix St George in the fall of 2003 and were asked to do the Dressage Demonstration and Clinics at Equifest 2004. She was amazing and was the Pirouette horse demonstrating her aptitude for collection.

May’s 2012 filly, Stilleto, by Soprano was purchased in utero.  A stunning filly, we cannot wait to see her out competing!!

May’s 2011 filly, Faerie’s Alibhai,  by Primmore’s Pioneer is a lovely mover like her mother with a super temperament.  Because we lost May, her daughter will stay on in our breeding program. 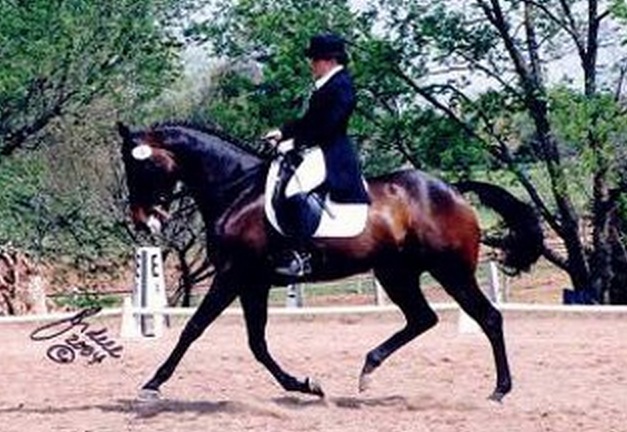